Abhijeet Gupta made record by winning title twice in a row 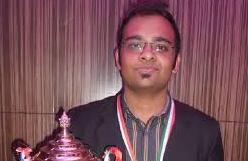 Abhijeet Gupta, Grandmaster and Commonwealth Champion, creates record by winning the title twice in a row at Hoogeveen International Chess tournamnet in the FIDE Open that concluded at the Dutch hamlet.

He started off with a thunderous points with four victories at the trot and then played a draw with Lalith Babu.

The third and fourth place was won by GM M.R Lalith Babu and G.M.M. Shyam

He also won the sixth and the seventh round from Migchiel De Jong and campriot S Nitin.

He scored 7.5 points out of a possible 9 to win the title and the second place was secured by Grandmaster Sandipan Chanda.

Abhijeet believed Jan Werle as the toughest competitor and one of the better ones in the tournament.