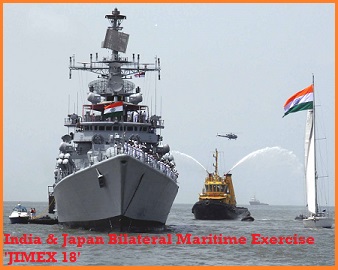 The Indian Navy would be represented by three indigenously-designed warships and a fleet tanker. The participating ships are INS Satpura, a multi-purpose stealth frigate, INS Kadmatt, an anti-submarine warfare corvette, missile corvette, and INS Shakti, the fleet tanker.

In addition, one submarine, P8I long-range maritime patrol aircraft and a number of integral helicopters would be participating in the exercise, the Navy said.

The JIMEX-18 exercise will comprise a harbor phase and a sea phase of four days each.

The JIMEX-18 after five years is indicative of an upswing in the Indo-Japanese defense relations and the continued efforts of both Governments to work closely to enhance safety and security of the global commons in keeping with 'rule-based order,' the Navy said.

The JIMEX exercise, the last edition was held in December 2013 off the Chennai coast.