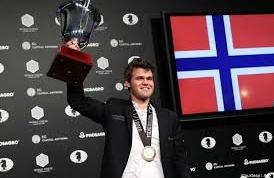 Hunders of fans joined from Russia, Norway, United States and other countries to look at the World Championship.

Every person was charged $100 as the entrance fee to join the Cahmpionship.

The competition ended in the dramatic tiebraker after winning apiece and nine draws.

Norwegian also won against US Grandmaster Hikaru Nakamura in October in a tournament.