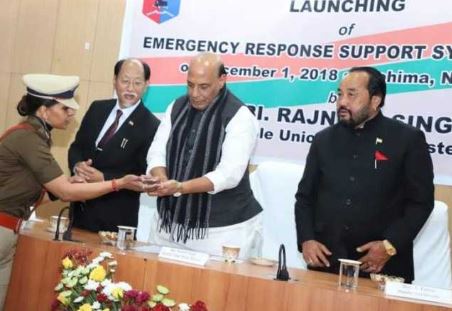 The 112 helpline number which was earlier launched in Himachal Pradesh and Nagaland was launched in 16 states and UTs by Union Home Minister Rajnath Singh under the Emergency Response Support System (ERSS).

The Emergency Response Support System (ERSS) integrates police (100), fire (101) and women (1090) helpline numbers into a single 112 helpline number and the process is on to integrate the health emergency number (108) soon.

To access the ERSS the person can dial ‘112’ on a phone. The person can also press the power button of a smartphone three times quickly to send a panic call to the Emergency Response Centre or long press the ‘5’ or ‘9’ key to activate the panic call from the normal phone.

The ERSS can also be accessed through  ‘112’ India mobile app, which is available free on Google Play Store and Apple Store or log onto the ERSS website for the respective state and send an emergency email or SOS alert to state Emergency response centre.

International Day for the Elimination of Violence Women Cele...

» About Cyber Crime Prevention Against Women and Children Portal- www.cybercrime.gov.in