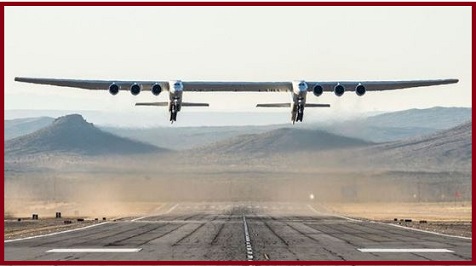 The world’s largest aircraft has a dual fuselage design and a wingspan greater than the length of an American football field.

The world’s largest aircraft has a world-record wingspan of 385 feet and is 238 feet long. It is wider than any airplane on the planet.

As part of the initial flight, the pilots evaluated aircraft performance and handling qualities before landing successfully back at the Mojave Air and Space Port.

Stratolaunch aims to develop an air-launch system with three primary components: A carrier aircraft; A multi-stage payload “launch vehicle” which would be launched at high altitude into space from under the carrier aircraft and A mating and integration system.

Stratolaunch was founded by the late Microsoft co-founder Paul Allen in 2011.