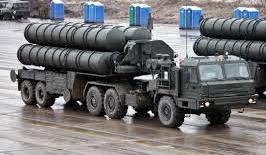 This agreement will be signed at the BRICS Summit 2016 in Goa on Saturday where leaders of Brazil, Russia, India, China and South Africa will be present.

The other agreements relating to bilateral ties will also be signed which includes Trade and Economic ties.

S-400 also utilised by Syria, can shoot up to three dozen over hundreds of kilometres

S-400 was also utilised by Syria to conduct a bombing campaign to support President Bashar al-Assad.

This defence system can track 300 targets and can shoot down three dozen at a time over hundred kilometres.

India-Russia signed an agreement for agro based irradiation ...

The Great Wall of China and Taj Mahal displayed side by side...

» World's Tsunami Day to be celebrated on 5th November 2016