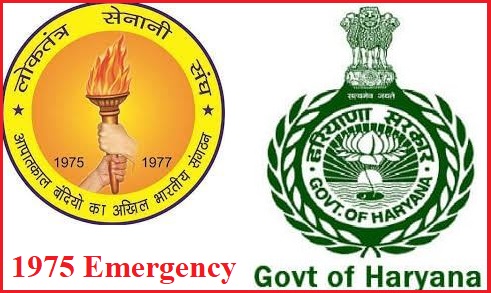 Haryana Government has introduced annual financial health assistance of Rs.5 lakh to loktantra senanis or their spouse for treatment at private or government hospitals.

The Annual Health Assistance Scheme was announced by the Chief Minister of Haryana, Manohar Lal Khattar.

Loktantra Senanis are people who were jailed during 1975-1977 Emergency under preventive detention laws.

As per the new changes proposed by the Haryana government, the term Emergency Victim on their identity cards would be replaced with Loktantra Senani.

At present, Loktantra Senanis, who went to jail during the Satyagraha Movement in an emergency, are already provided a monthly pension of Rs 10,000 by the state government and also free travel in the Haryana Roadways buses.

Then President Fakhruddin Ali Ahmed, upon advice by Prime Minister Indira Gandhi, declared a state of national emergency under Article 352 of Indian Constitution. Once the emergency was proclaimed it effectively bestowed on Prime Minister the power to rule by decree, suspending elections and civil liberties.

During the 1975 Emergency period, most of the political opponents of Indira Gandhi were imprisoned, press censorship was placed and several other human rights violations were also reported such as forced mass-sterilization campaign.