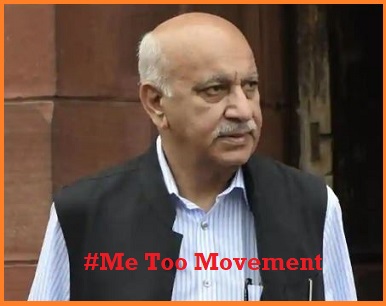 The National Commission for Women (NCW) with a sight of happiness welcomed MJ Akbar's resignation. It said, at last, the government has listened to the voice of women and acted accordingly.

MJ Akbar (67 years) is a journalist-turned-politician, who became Minister of State for External Affairs two years ago, is the first in the BJP-led government to quit over an allegation.

The #MeToo campaign first began as a hashtag on Twitter in 2017, when Hollywood producer Harvey Weinstein was accused of sexual harassment by over 70 women. Almost after a year in 2018, the movement has now arrived in the Bollywood, Indian film industry; and is spreading through India.

In India, the #MeToo movement started after former Bollywood actress Tanushree Dutta alleged that Nana Patekar sexually harassed her on a movie set in 2008. after that Bollywood Actor, Alok Nath was also alleged by director-producer Vinta Nanda three others.