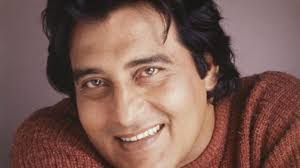 Late Vinod Khanna was an Indian Bollywood superstar actor, producer and politician.  He had been posthumously accorded with the Dada Saheb Phalke Award-2017 on 13th April 2018 in New Delhi.

Vinod Khanna was born on 6th October 1946 to a Punjabi family in Peshawar, British India (now in Pakistan). He died due to deterring health and severe dehydration at the age of 71 years on 2 April 2017.

Vinod Khanna has featured in about 146 films in his filming career spanning over 40 years. He made his debut in 1968 with ‘Mann Ka Meet’. He was known for his suave style and composed nature.

Vinod Khanna has also won numerous awards, including the ‘Filmfare Award’ for best-supporting actor in ‘Haath Ki Safai’ and the Filmfare Lifetime Achievement Award in 1999.

Vinod Khanna decided to quit film industry at a peak time of his career to follow his spiritual guru Osho Rajneesh in the year 1982.

Vinod Khanna married to Geetanjali his wife whom he divorced in 1985. He had two son’s Akshay Khanna and Rohan Khanna who are famous bollywood actors.

Vinod Khanna started his political career in 1997. In 1998, he got elected to the Lok Sabha from the Gurdaspur constituency in Punjab on a BJP ticket. He served as Union minister for culture and tourism in 2002 under Atal Bihari Vajpayee government. Later, he also became minister of state in Ministry of External Affairs. At the time of his death in 2017, he was sitting BJP member of Lok Sabha from the Gurdaspur constituency (Punjab).

Dadasaheb Phalke Award is conferred by Union Government for distinguished contribution to growth and development of Indian Cinema.

Dadasaheb Phalke Award is awarded on basis of recommendations of a committee of eminent personalities set up by the government. The award consists of a Swarn Kamal (Golden Lotus), a cash prize of Rs. 10 lakhs and a shawl.