Lasers and its Applications, Revolutionary Technology and Science 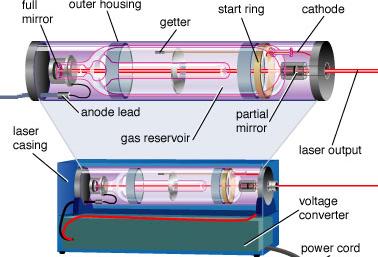 What is Laser? Innovator, Year of Invention, Applications

A laser is a device that emits light through a process of optical amplification based on the stimulated emission of electromagnetic radiation. A device that induces atoms or molecules to emit light and amplifies the light to different wavelengths, usually caused by a very narrow radiation beam. In general, the emissions cover a very small spectrum of visible wavelengths

Stimulated emissions produce a second photon identical to the stimulating one, such that the new photon is of the same form, wavelength, and direction – i.e. both of them are compatible with each other and with peaks and valleys in the form

Albert Einstein put the foundational plot of laser in 1917 and On May 16, 1960, Theodore H. Maiman operated the first functioning laser at Hughes Research Laboratories, Malibu, California, ahead of several research teams, including those of Townes, at Columbia University, Arthur Schawlow, at Bell Labs, and Gould, at the TRG (Technical Research Group) company

What are the Applications of Laser?

Compare between Cloud Computing and Edge Computing  In...

» ICFRE and TIFAC Signed MoU to Support Forest Based Communities