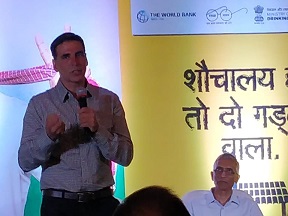 Famous Bollywood Actor, Akshay Kumar, launched an advertisement campaign for the Swachh Bharat Mission (Grameen) or (Rural) on 27th May 2018 in New Delhi.

The advertisement campaign was launched at a Collectors Convention for Toilet Technology organized in New Delhi.

The new advertisement campaign is 1 minute long that focuses on promoting the twin pit toilet technology in rural India.

The advertisement featured Akshay Kumar also with actoress Bhumi Pednekar along with actor Shri Kumar. It demonstrates that how twin pit toilet technology can be used to make fertilizers for organic farming.

The advertisement campaign launched is an effort, supported by the World Bank, towards encouraging this twin pit technology using mass media.

The new advertisement can be searched on the YouTube channel of the Swachh Bharat Mission (Grameen) with a link: tinyurl.com/sbmgramin.

The new advertisement will be translated in several regional languages, and the Hindi version will start airing on television channels soon.

Twin pit technology is scientifically proven with facts such as:

In 6 months to 1 year, the waste in the filled pit decomposes completely

This decomposed waste is safe to handle and rich in NPK (nitrogen, phosphorus, potassium) nutrients which makes it ideal for use in organic farming.

» First Apex Conference for the CEOs of Smart Cities To Be Held in Bhopal Details, Aim