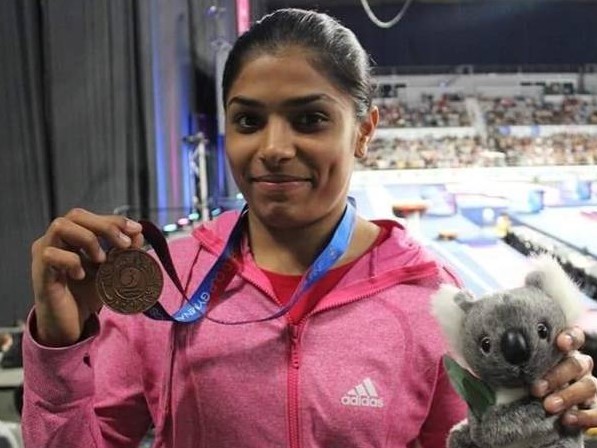 Aruna Budda Reddy on 24th February 2018, created history by becoming the first Indian gymnast to win an individual medal as she secured a Bronze in the women’s vault at the 2nd edition of the Gymnastics World Cup-2018 in Melbourne, Australia.

Aruna Budda Reddy is a 22 years old Indian gymnast, who comes from Hyderabad. She scored 13.649 average points to win the Bronze at the Hisense Arena.

Tjasa Kysslef of Slovania won the Gold with a score of 13.800 points, while Emily Whitehead of Australia took the Silver with 13.699 points.Another Indian gymnast, Pranati Nayak finished at sixth position with a score of 13.416 points.

Aruna Budda Reddy also contested in the final round of the women’s floor event held on 25th February 2018, where she finished at seventh position with a score of 10.833 points.

However, this was Aruna's first international medal, although she has taken part at the 2013 World Artistic Gymnastics Championships, 2014 Commonwealth Games, 2014 Asian Games and the 2017 Asian Championships where she attained the sixth position.

Dipa Karmakar, who finished fourth in the 2016 Rio Olympics in women's vault event, has won a bronze each in the Asian Championships and 2014 Commonwealth Games but not at the level of any World Cup.