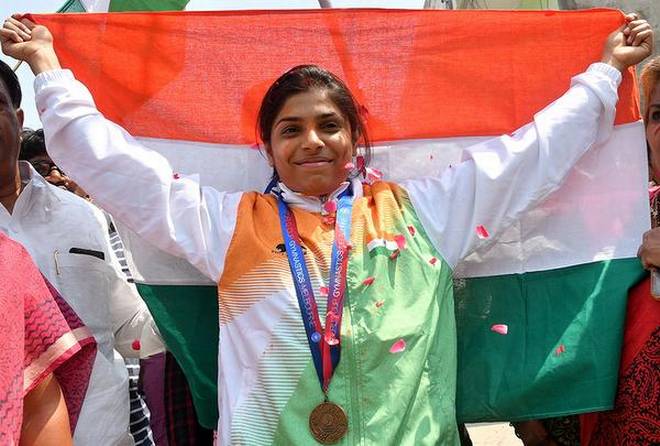 Aruna Budda Reddy created history by becoming the first Indian gymnast to win an individual medal (Bronze Medal) in the women’s vault at the 2nd edition of the Gymnastics World Cup-2018 in Melbourne, Australia on 24th February 2018.

Aruna Budda Reddy was born on 25th December 1995 to a middle-class family in Hyderabad, Telangana. Her father, Late Narayana Budda Reddy was a Chartered Accountant and mother Subadhra Reddy is a Housewife. She has an elder sister named Pavani Reddy.

Aruna Reddy is an active sports person. She holds ‘Black Belt’ in Karate and also served as a Karate Trainer before joining Gymnastics.

Aruna Reddy’s father inspired her to join Gymnastic when she was just 5 years old. She took training under coaches Swarnalatha and Ravinder at the Lal Bahadur Shastri stadium in Hyderabad.

Aruna Reddy is also scheduled to take participation at the Commonwealth Games-2018.

Aruna Reddy after winning a Bronze medal at the Gymnastics World Cup-2018 dedicated her win to her late father who had always encouraged her to exceed in Gymnastic.

Chief Minister of Telangana, K. Chandrashekar on 5th March 2018, has awarded Aruna Reddy with a cash prize of Rs 2 crore after her historic victory in the World Cup-2018.