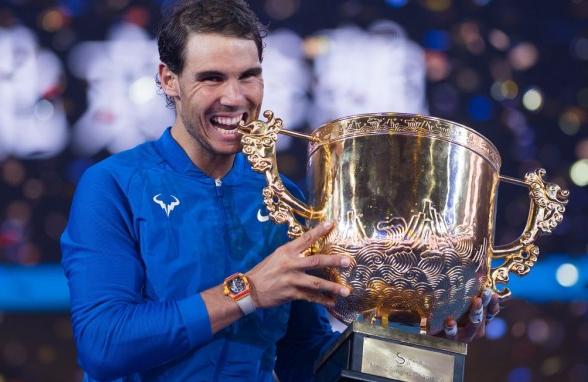 Cincinnati Masters Rafael Nadal beat Nick Kyrgios of Australia in straight sets of 6-2, 6-1 in the China Open final to win his sixth ATP title of 2017

France’s Caroline Garcia also defeated world no1 Simona Halep from Romania in straight sets of 6-4, 7-6 (3) in the world women event.

Top-ranked Nadal who was tied with Roger Federer and Alexander Zverev at five titles this season surpassed them with the win in Beijing which is his 75th career singles trophy.

On the other hand, Garcia who had lost to Help previous two times they played against each other, won her second consecutive WTA title.

Now, Garcia has climbed up 6 spots from the 15th rank to 9th in the latest WTA singles rankings list with this win which is making her debut entry in the top-10.

The win was also Nadal’s 2nd consecutive hard court title after losing his last 8 consecutive hardcourt finals. It is also his 2nd title at Beijing following his 2005 win.

The 31-years old’s six trophies this year include a record 10th title at the French Open and a third at the US Open.

The last time Nadal won at least six titles in a year was in 2013 when he captured 10 trophies for the season.