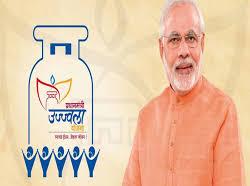 These connections have been released to provide LPG to women in BPL families in the country.

Under the scheme, 638 districts from 35 states and Union Territories where more than 1.81 crore applications are received.

Out of these applications, 1.5 core applications have been cleared and 1 crore connections are given to beneficiaries.

The major beneficiaries are the weaker sections of the society SC/ST who are accounted for 44% of connections released.

It was also informed that safety awareness campaign will also be carried out from November for 4 months to spread awareness to LPG consumers on safety.