Government of India inaugurated the All India Pension Adalat 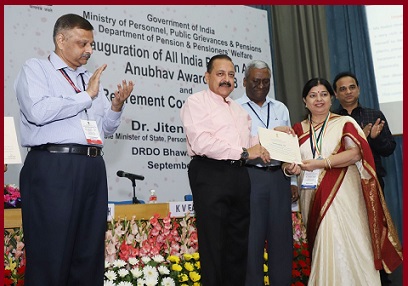 The Pension Adalat is being organised by the Department of Pension & Pensioners Welfare (DoP&PW). The measure is believed to resolve issues of thousands of pensioners in one day, in a single sitting across the country.

The Pension Adalat is one of the largest exercises for pensioners’ welfare ever undertaken by the Government as part of good governance dedicated to central government pensioners.

Through this scheme, on a single day, all the Central Government Ministries will conduct their respective Pension Adalats and on-the-spot resolution will be offered to the grievance holder.

Also, a Pre-Retirement Counselling (PRC) was conducted for the Central Government employees who will be retiring in the next 6 months.

About 600 retiring Central Government employees took part in this PRC. The PRC Workshop was conducted to create awareness about post-retirement entitlements.

Dr. Jitendra Singh also presented the ‘Anubhav’ awards 2018 to 6 pensioners for their contribution to creating the institutional memory for the departments. The Anubhav scheme was instituted through the idea of Prime Minister Narendra Modi in 2015.

Dr. Jitendra Singh also launched a booklet named “An era of sustained reforms for Central Government Pensioners” with simplification of rules and steps to strengthen the Grievance Portal and make it user-friendly.