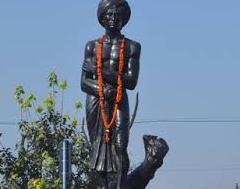 PM Modi stated that he pays homage to Bhagwan Birsa Munda on his birth anniversary and recalls his courage and efforts towards empowerment of tribal communities.

He was an important figure in Indian Independence movement who rose tribal belt against British Raj.

He was a prophet who believes in simple teachings of Hindu religion which impressed the people.

His birth anniversary is celebrated by tribal people of Mysore and Kodagu districts of Karnataka.

A function is also arranged at Kokar Ranchi at his Samadhi Sthal.