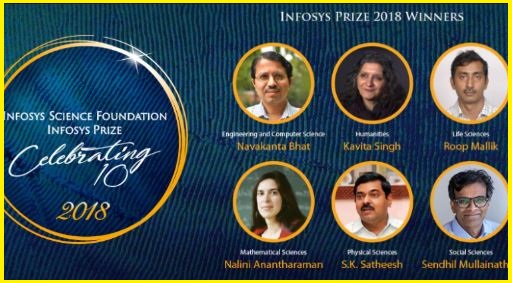 The Infosys Science Foundation (ISF) on the occasion of its 10th anniversary announced six winners of the Infosys Prize 2018 in the six different categories of the award. They were selected out of 244 nominations by a six-member jury of renowned scientists and professors.

Awardee receives 22-carat gold medallion, a citation certificate and prize money of US $100,000. It is one of the highest monetary awards in India that recognizes the scientific research.

1. Engineering and Computer Science: Navakanta Bhat, a Professor at Indian Institute of Science (IISc), Bangalore. He was awarded for his work on the design of novel biosensors based on his research in biochemistry and gaseous sensors that push the performance limits of existing metal-oxide sensors.

2. Humanities: Kavita Singh, a Dean, School of Arts & Aesthetics, Jawaharlal Nehru University. She was awarded for her illuminating study of Mughal, Rajput and Deccan art.

3. Life Sciences: Roop Mallik an Associate Professor, Department of Biological Sciences, Tata Institute of Fundamental Research (TIFR). He was awarded for his work on molecular motor proteins, which are crucial for the functioning of living cells.

5. Physical Sciences: SK Satheesh, a Professor, Centre for Atmospheric & Oceanic Sciences, IISc Bangalore. He was awarded for his pioneering scientific work in the field of climate change.

6. Social Sciences: Sendhil Mullainathan, a professor of Computation and Behavioral Science, the University of Chicago in the US. He was awarded for his path-breaking work in behavioral economics.

RBI shortlisted 5 IT firms for implementation of CIMS

RBI shortlisted 5 IT firms for implementation of Centralised...