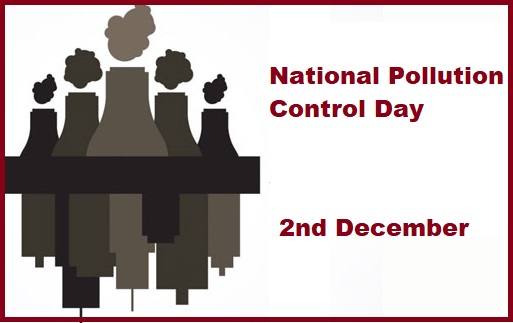 National Pollution Control Day also observed to give the honor in memory of the thousands of human beings who had lost their existence because of the Bhopal gas tragedy.

National Pollution Control Day is observed by spreading awareness among people regarding how to fight and prevent pollution.

National Pollution Control Day focuses to make people aware & spread awareness in the industries that cause various pollution like water, air, soil, noise and affect the environment and human health.

Bhopal gas tragedy occurred in the night of 2nd December and 3rd December 1984, because of the unintentional discharge of the poisonous chemical known as Methyl Isocyanate (also called MIC) as well as some other chemicals released from the Union Carbide Chemical Plant positioned in the Bhopal city.

Bhopal gas tragedy was the worst in the world’s industrial history and people there still continue to witness physical and mental disabilities.

» International Day of Solidarity with the Palestinian People On 29 November