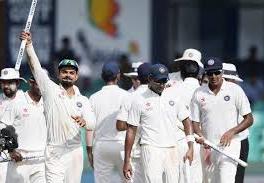 India wins the third test match held against England by 8 wickets at Mohali.

India chase down 103 run target with eight wickets remaining after bowling out England for 236 runs in second innings.

India chase down a target of 103 with only two tickets down in 20.2 overs.

Patel made his fifth half century remains un-out

Parthiv Patel was unbeaten and scored 67 runs which is his fifth half century in test cricket match and Haseeb Hameed remained unbeaten at 59.

The eight day of the test match will held on 8th December in Mumbai.

India beats England by an innings and 36 runs at fourth test...