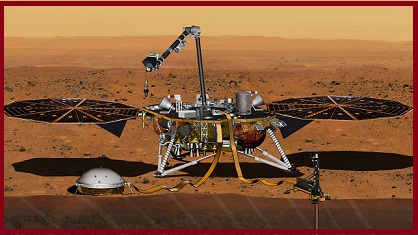 NASA’s new InSight lander has set up its first instrument on planet Mars. The instrument placed by InSight, which landed on Mars on 26th November, is a quake monitor (seismometer) that will listen for quakes and wobbles.

It is the first time that a scientific instrument has ever been placed on another planet’s surface. InSight will also put a wind cover over the seismometer next month and initiate a new experiment.

InSight or the Interior Exploration using Seismic Investigations, Geodesy and Heat Transport mission of NASA is a robotic lander that seeks to gather information about the deep interior of Mars.

The successful execution of Insight mission will enable humans to have a better understanding of the evolution of the Solar System’s terrestrial planets – Mercury, Venus, Earth, Mars and Earth’s Moon.

» About China's Chang’e-4 Mission To Dark Side Of Moon: Details, Features, Aim