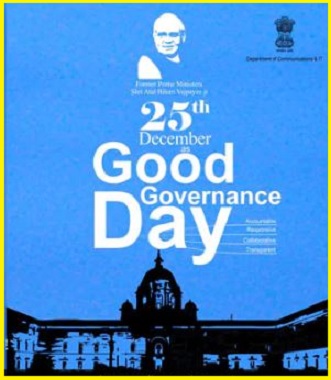 Good Governance Day is observed on 25th December every year across India on the occasion of the birth anniversary of former Prime Minister Atal Bihari Vajpayee.

On the occasion, NDA Government led by PM Narendra Modi announced that the birth anniversary of Atal Bihari Vajpayee would be now commemorated annually as the Good Governance Day in India.
Good Governance Day coincides with the Christmas Day celebrations on 25th December, Although, there is not a holiday. The day is celebrated by organizing a variety of activities in the government offices, schools, colleges and other educational institutions..