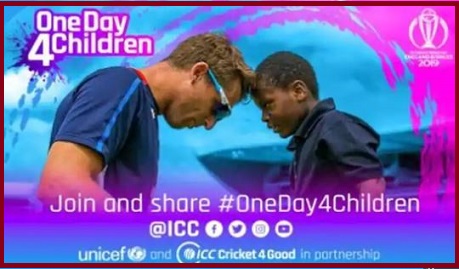 International cricket council (ICC) cricket for good in partnership with UNICEF, launched #OneDay4Children, a tournament-wide campaign to help construct a better world for all child, at the World Cup.

All 48 matches of the event will support #OneDay4Children activity and the funds gathered will strengthen UNICEF’s work for children in cricket playing nations across the world.

The campaign will conclude at the England v India game at Edgbaston on 30 June.

The tournament will run from 30 May to 14 July. Old Trafford in Manchester and Edgbaston in Birmingham will host the semi-finals 9 and 11 July respectively, while final will be played at Lord’s in London on 14 July 2019.