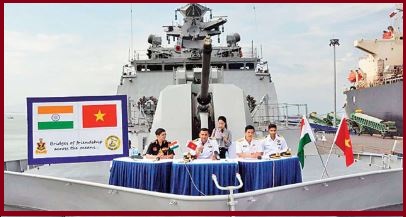 Navies of India and Vietnam held a four-day maritime exercise off Cam Ranh Bay in Vietnam with an aim to boost operational cooperation.

India-Vietnam Naval Exercise conduction of the bilateral exercise on an annual basis is expected to give a further fillip to the existing strong bilateral relation between India and Vietnam.

From the Indian side warships, INS Kolkata and INS Shakti participated in the annual exercise, comprising a harbor and a sea phase.

India-Vietnam Naval Exercise was undertaken as a part of the ongoing overseas deployment of eastern fleet ships to South East Asian countries.

India-Vietnam relations were elevated to the level of Comprehensive Strategic Partnership during the visit of Prime Minister Narendra Modi in 2016. Enhancing military ties was a key element of talks during the visit of Vietnamese President Tran Dai Quang to India in March 2018.