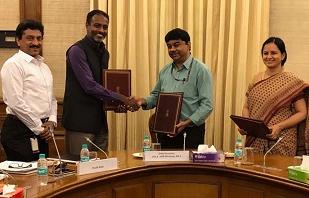 The Government of India has signed an agreement for IBRD Credit of US $21.7 Million from World Bank on 29 May 2018 in New Delhi.

The loan agreement was made in regard to strength Public Financial Management in Rajasthan Project.

The Implementing Entity Agreement for the project was signed by Secretary, Finance (Budget) on behalf of Government of Rajasthan, and Acting Country Director (India) on behalf of World Bank.

The estimated cost of the project is around US $31 million, of which US $21.7 million will be financed by World Bank and remaining amount will be funded out of the state budget.

The project main aim is to contribute to improved budget execution, enhanced accountability and greater efficiency in Revenue administration in Rajasthan.

The project also involves boosting of Strengthening of Expenditure and Revenue Systems, Public Financial Management Framework & Project Management and Capacity Building and others.

The project has a duration of around 5 years.