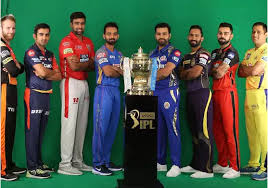 Indian Premier League-2018 (IPL) is all set to start on 7th April 2018. The IPL-2018 opening ceremony will take place at the historic Wankhede Stadium in Mumbai.

The IPL-2018 is the 11th edition of the IPL season. It was established by Board of Control for Cricket in India (BCCI) in the year 2007.

The IPL-2018 is schedule to be held from 7th April 2018 to 27th May 2018. It will feature the comeback of the Chennai Super Kings and the Rajasthan Royals Teams, since 2013 while the suspension of the Rising Pune Supergiant and Gujarat Lions Teams in 2018 edition.

The IPL-2018 inaugural ceremony will witness the performance of Bollywood actors like Hrithik Roshan and Jacqueline Fernandes etc. It is schedule to begin at 6:15 pm IST on 7th April.

The IPL-2018 season will be officially broadcasted on Star Sports TV Network, and online live streaming will be available on Hotstar.

The IPL-2018 season first match will be played between Mumbai Indians (Defender Champion) and Chennai Super Kings from 8:00 PM onwards at Wankhede Stadium in Mumbai.