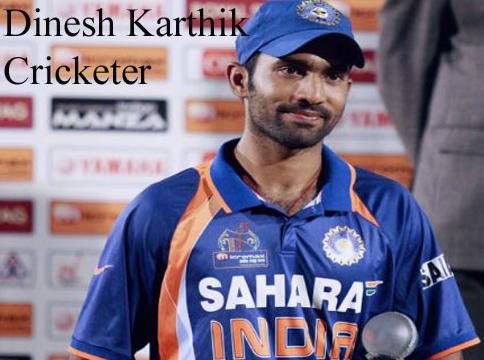 Dinesh Karthik popularly known as ‘DK’ is an Indian cricket player, plays in all the formats of cricket. He plays as 'Right-Handed Batsman' and 'Wicket Keeper' in the Indian International Cricket Team Squad.

Dinesh Karthik was born on 1st June 1985 in Chennai, Tamil Nadu. His father 'Krishna Kumar Karthik' was a First-division cricket player in Chennai. His mother 'Padma' is a housewife and has a younger brother named 'Vinesh'.

Dinesh Karthik took his primary education from Delhi Public School (FAIPS-DPS) in Kuwait where his father worked for 2 years. Later he moved to India where he completed his schooling from Chennai. He started his training in cricket at an early age of 10 years.

Dinesh Karthik was highly inspired & motivated by his father, who always dreamt to play cricket for the nation but was failed due to family obstacles for education issues.

Dinesh Karthik started playing Indian Premiere League (IPL) for the team ‘Delhi Daredevils’ for three consecutive years 2008, 2009 and 2010 and later back in the year 2014.

Dinesh Karthik was selected by ‘Mumbai Indians’ IPL Team for two years 2012 and 2013. He was selected for ‘Royal Challengers Bangalore’ Team in the year 2015.

Dinesh Karthik currently got selected by ‘Kolkata Knight Riders’ IPL Team as a captain in the year 2018.