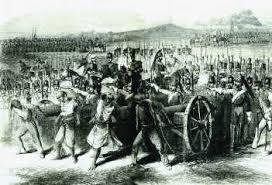 The East India Company had brought major portions of India under its control by the first half of the 19th century (the 1850s).

One hundred years after Battle of Plassey, anger against the unjust and oppressive British Government took the form of a revolt that shook the very foundations of British rule in India.

The Revolt of 1857 was the first rebellion also called the first war of Independence (a period of rebellions in the north and central India) against the British power (in 1857-1858) and its East India Company which took the massive form.

The British usually refer to the rebellions of 1857 as the Indian Mutiny or the Sepoy. It is widely acknowledged to be the first-ever united rebellion against colonial rule in India.

It began as the revolt of the sepoys of the Company’s army but eventually secured the participation of the masses. Its causes lay deeply embedded in the grievance that all sections of India society nurtured against the British rule.

Paik Rebellion (Paika Bidroha) to be named as First War of I...