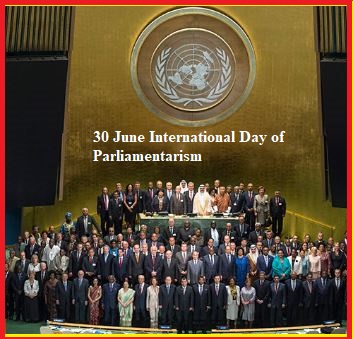 The International Day of Parliamentarism is celebrated every year on 30th June 30 across the world with an aim to recognize the role of parliaments in national plans and strategies and in ensuring greater transparency and accountability at national and global levels.

The International Day of Parliamentarism celebrates parliaments, as the cornerstone of democracy and as institutions designed to improve the lives of the people they represent. It also provides an opportunity for parliaments to take stock, identify challenges, and ways to address them effectively.

The International Day of Parliamentarism was declared by the United Nations General Assembly (UNGA) in May 2018 itself through its resolution A/RES/72/278, recognizing the role of parliaments in national plans and strategies.

The date June 30th is also the date in 1889, on which the Inter-Parliamentary Union, the global organization of parliaments was established.

The parliaments represent the voice of the people, pass laws, allocate funds to implement laws and policies, and hold governments to account.

Out of 193 member countries of the United Nations, 79 are bicameral and 114 are unicameral.