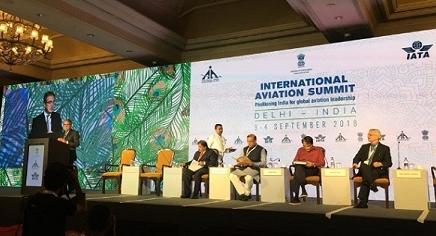 The International Aviation Summit seminar has been jointly organised by the Airports Authority of India (AAI), Ministry of Civil Aviation and International Air Transport Association (IATA).

Union Minister for Civil Aviation Suresh Prabhu on the occasion informed that the Civil Aviation Ministry is coming up with Vision 2035 under which it plans to build 100 new airports across India in the next 10-15 years with an investment of USD 60 billion and address the major issues concerning aviation industry such as airport infrastructure, taxation and use of technology.

Suresh Prabhu also informed that the airports will be constructed through a public-private partnership (PPP). India's economy is poised to grow to USD 10 trillion by 2035 and the aviation sector will be one of the major contributors to that growth.

Suresh Prabhu also proclaimed that the Government is working on a cargo policy and is planning to have a cargo hub in India.

According to IATA, India is believed to overtake Germany, Japan, Spain and the UK within the next ten years to become the world's third largest air passenger market.

The Government of India is preparing for a massive air traffic surge to handle as many as 100 crore passengers in next 15-20 years, much above the 50 crore trips a year as predicted by IATA.