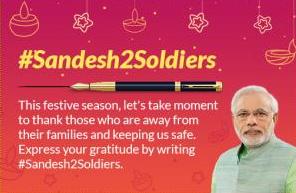 In a move to show gratitude towards arymen and their service toward nation, Prime Minister of India Narendra Modi invites citizen of India to pen their feelings, thoughts for our defence services person this Diwali (Deepawali) using social media platform.

Government officals have confirmed and overwhelming response from nation to wish soldiers of India this Diwali. Government has made arrangements to collect and send these messages to Army on Diwali (Deepawali) as a gift from nation.

Prime Minister Narendra Modi calls #Sandesh2Soldiers as a move for those who are away from their families this festive season.

Prime Minister Narendra Modi's call for #Sadesh2Soldiers has become the most successful call to nation till date in response from people of India in short period of time.