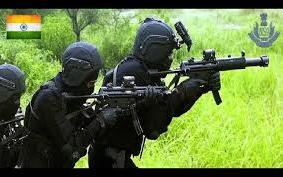 According to the recent report, Black Commandos will soon encounter new transformation. Moreover, NSG will be soon deployed on the country’s border for combating terrorism activities.

NSG will be armed with modern Sub-Machine Guns (MP5) and German made Sniper Rifles (PSG1 A1).

NSG’s Black Commandos will be equipped with a bullet-proof briefcase like a shield when open; will help to protect them from enemy’s firing range.

NSG was established in the year 1984, during ‘Operation Blue Star’ and Assassination of Former Indian PM Indira Gandhi.

NSG was formed to counter terrorist activities with an aim to protect the country against internal criminal disturbances and VIP security.

NSG Black Cats deployed in Jammu And Kashmir after Governor'...