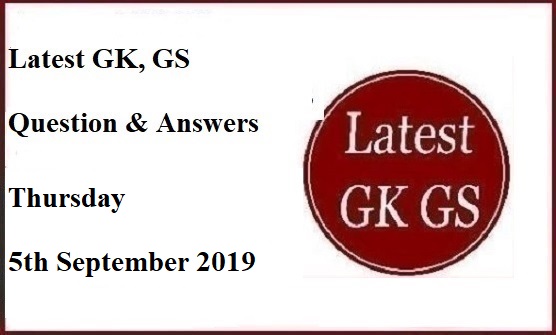 1. India and US which joint military exercise started in the US on 5 September?

2. Government of India under UAPA Bill Law released a list of Individual Terrorists, what are the names?

3. PM Modi has become the first Indian Prime Minister to visit which among the following Russian regions?

4. Teachers’ Day is celebrated annually to commemorate the birth anniversary of which former Indian President?

5. According to the EIU Global Liveability Index 2019, Delhi and Mumbai ranked at what places?

6. Which cricketer toppled Virat Kohli to regain his top spot in the ICC Test Rankings?

8. Which state of India has recently reported Congo Fever?

10. Which of the following has been named as India’s ‘Best Swachh Iconic Place’ recently?

11. Which e-commerce company recently announced to eliminate single-use plastic from its packaging by June 2020?

12. When is the International Day of Charity observed every year?