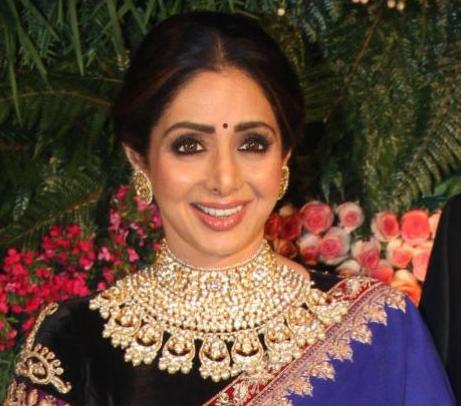 Legendary Veteran Bollywood Actress ‘Sridevi Kapoor’ passed away after a sudden cardiac arrest on 24th February 2018 in Dubai. She went to attend the wedding ceremony of her nephew Mohit Marwah.

Padma Shri awardee, Sridevi aged 54, (Born on 13th August 1963) had a remarkable and glorious career spanning over four decades. She started her acting career as a child artist when she was just 4 years old.

Sridevi was considered to be the first female superstar of Indian cinema. She had shown her flawless contribution as an actor and producer in Hindi, Tamil, Telugu, Kannada, Malayalam films.

Sridevi was recognised for her comic timings, her unmatched facial expressions, sweet thin voice tone and her beautiful eyes and of course her dancing skills. She can make anyone cry and laugh both, at the same time while giving an emotional performance.

‘Hawa Hawaii Girl’ Sridevi with her stunning performances had won hearts of millions. It’s been seen most of her movie’s titles and songs are still remembered just because of her stunning lead performances such as Chandni, Nagina, Chalbaaz, Sadma, Lamhe, Tofaa, Mr. India, and many others among 300 films in different languages.

Sridevi made her debut as a heroine in Hindi films with 'Solva Sawan' in 1979. In 2012 she made her come back with the Bollywood movie 'English Vinglish' and made her last acting appearance in Bollywood super hit movie ‘Mom’ released on 7th July 2017.

In 2013, the Government of India awarded her the fourth highest civilian honor Padma Shri.