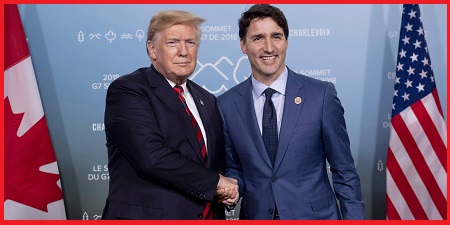 The United States, Canada, and Mexico on 30th September 2018, have agreed to sign a new the North American Free Trade Agreement after almost a year of negotiations. The new pact has been named the United States-Mexico-Canada Agreement (USMCA).

The United States-Mexico-Canada Agreement (USMCA) trilateral pact is believed to be signed by the three North American countries before the end of November 2018, after which it would be submitted to Congress.

The USMCA agreement was agreed upon by Canada just hours before the US imposed September 30 midnight deadline.

The USMCA agreement is expected to re-balance US’s trade relations with Mexico and Canada. It will modernize what was covered by NAFTA by adding provisions on digital trade and intellectual property.

The USMCA agreement will also highlight new rules on the origin of autos and the market access to Canada's dairy sector.

The USMCA agreement would make significant changes to the rulebook that has governed North America, trade since 1994. It will for the first time set rules for financial-services and digital businesses that have emerged since the bloc was created.

The USMCA agreement would allow US farmers greater access to Canada's dairy market and address concerns about potential US auto tariffs. The pact will come up for review every six years.

Under the USMCA agreement, Canada has agreed to export a quota of 2.6 million vehicles to the United States in the wake of 25 percent global autos tariffs imposed by the US on national security grounds.

The USMCA agreement, however, failed to resolve U.S. tariffs on Canada's steel and aluminum exports.