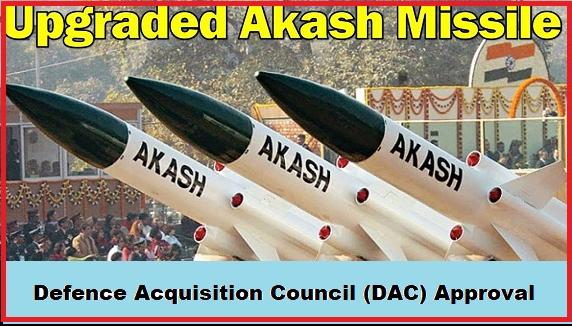 Under this proposal, two new two regiments of this missile systems will be procured under ‘Buy (Indian)’ category from Bharat Dynamics Limited (BDL).

Akash Missile is a short-range mobile surface-to-air missile indigenously developed by Defence Research and Development Organisation (DRDO) as part of Integrated Guided Missile Development Programme initiated in 1984. It is made by Bharat Dynamics Limited (BDL).

Akash Missile a has range of 25 km and can engage multiple targets at a time in all weather conditions. It has the capability to neutralise aerial targets like fighter jets, cruise missiles and air-to-surface missiles as well as ballistic missiles.

Akash Missile has a large operational envelope, from 30 metre to the maximum of 20 km. Each regiment of this missile system consists of six launchers, each having three missiles. It is in operational service with Indian Army and  Indian Air Force.

The upgraded Akash Missile System will include seeker technology, possess 360 degree coverage and will be of compact configuration with reduced signature.

The upgraded Akash Weapon System is operationally critical equipment which will provide protection to vital assets.

» Government of India inaugurated the All India Pension Adalat