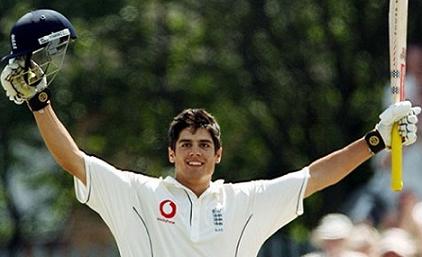 England's star opening batsman Alastair Cook has achieved a feat in his last Test match before his retirement. He has reached the fifth position in the list of batsmen who have scored the most runs in Test cricket.

Alastair Cook played the 161st match of his career against India in the Oval, London where he scored 76 runs and reached a total score of 12,472 runs of his career.

Alastair Cook with his feat to achieve 5th position surpasses the position of Srilankan legendary batsman, Kumar Sangakkara who has scored 12,400 runs in 134 test matches.

Alastair Cook also becomes the greatest batsman and player to score most runs in the history of England's National Cricket Team.

Among the batsmen who scored the most runs in Test cricket, Sachin Tendulkar of India leads at the top with 15,921 runs. After this, former Australian captain Ricky Ponting (13,378 runs) at 2nd position, former South African all-rounder Jacques Kallis (13,289 runs) at 3rd position, Rahul Dravid (13,288 runs) at 4th position.