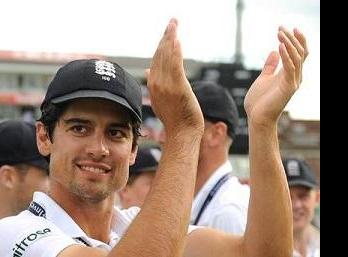 Alastair Nathan Cook was born 25 December 1984 (33-years-old) in Gloucester, England. He is a former captain of the England Test and One-Day International (ODI) teams, he is also an English cricketer who plays for Essex County Cricket Club.

Alastair Cook holds a number of English and international records. He is regarded as one of the greatest batsmen ever to play for England and is one of the most prolific batsmen of the recent times.

Alastair Cook is a Left-Handed Batsman played his Test debut at the age of 21 years, replacing Michael Vaughan against India at Nagpur in 2006, and hit an unbeaten century in the second innings.

Alastair Cook ODI debut played was: England vs Sri Lanka at Old Trafford, 28 Jun 2006 and played last ODI between England vs Sri Lanka at R.Premadasa Stadium, 16 Dec 2014.
Alastair Cook T20 debut played was England vs Windies at Kennington Oval, 28 Jun 2007 and Last T20 was vs South Africa at SuperSport Park, 15 Nov 2009.
Alastair Cook in total has played 161 tests and scored 12,254 runs at an average of 44.88, which includes 32 hundred and 56 half centuries. His highest test score of 294 came against India at Birmingham during the 2011 series. As an opener, he made a record 11,627 runs.
Alastair Cook became captain succeeding Andrew Strauss in 2012 and England went on to win 24 Tests under his charge. In 2012, he led England to their first victory in India for 27 years. In 2016, he became the first England batsman to reach 10,000 Test runs.

Most Test centuries for England - 32

Most Test appearances for England - 160

Most consecutive Test appearances by any player - 158

Most Tests as England captain - 59

Most catches by England fielder - 173