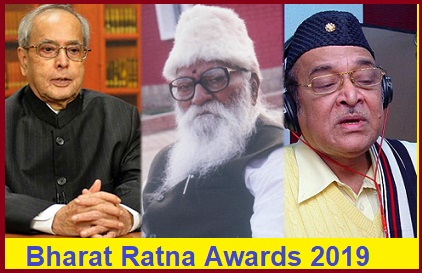 The Government of India has conferred Bharat Ratna 2019 awards on 26th January 2019. It was presented by President of India, Ram Nath Kovind.

Pranab Mukherjee served as the 13th President of India from 2012 until 2017. A veteran congressman, Pranab Mukherjee had held various key portfolios like Finance, Defence and External Affairs as Union Minister. He is the outstanding statesman of the present time.

Nanaji Deshmukh laid great emphasis on education as a social worker. The first Saraswati Shishu Mandir was established by him at Gorakhpur in 1950. He was a member of RSS and also served as general secretary of Bharatiya Jana Sangh.

Nanaji Deshmukh took part in Jai Prakash Narayan movement during the Emergency. He got elected as a member of Lok Sabha from Balrampur in 1977. He has also served as a nominated member of Rajya Sabha. Nanaji was awarded Padma Vibhushan in 1999.

Bhupen Hazarika was a playback singer, lyricist, musician, singer, poet and film-maker from Assam, widely known as Sudhakantha. He mainly wrote and sang in the Assamese language.

Bhupen Hazarika works were marked by humanity and universal brotherhood and have been translated and sung in many languages. He also served as a channel to introduce the culture and folk music of Assam and Northeast India to Hindi cinema at the national level.