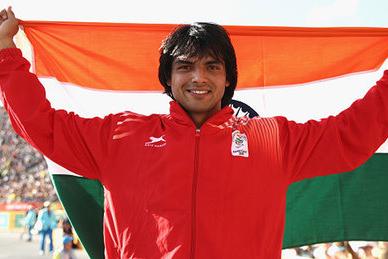 Neeraj Chopra has bagged the 20th ‘Gold Medal’ for India, on the 10th day of the 21st Commonwealth Games in the Men's 52 kg category of boxing competition on14th April 2018.

Neeraj Chopra with his triumph also became the first Indian athletes to win ‘Gold Medal’ in CWG event. This was his debut match & maiden medal in the CWG competition.

Neeraj Chopra achieved the feat by recording the best effort in the Commonwealth Games-2018 event by scoring 86.47 meters in men's javelin throw.

Neeraj Chopra made an effort of 85.50 metres in first attempt and 84.78 metres in his third attempt but again countering his own score with a winning effort of 86.47 meters in his fourth attempt.

Australia’s Hamish Peacock took ‘Silver Medal’ with a final attempt of 82.59, followed by Grenada's Anderson Peters 82.20 metres claiming him of a ‘Bronze Medal’.

Vipin Kashana another Indian in the run, finished 5th with a best of 77.87 metres in the javelin throw event.

Earlier, Indian Young Athlete, Neeraj Chopra (20 years old) who hails from Panipat, Haryana had won ‘Gold Medal’ in 2016 IAAF World’s U20 Championships held in Poland. He had also won the ‘Gold Medal’ at the 2016 South Asian Games with a throw of 82.23 metres setting up a world junior record.

Neeraj Chopra also won ‘Gold Medal’ in the Asian Athletic championships-2017 with a throw of 85.23 meters

CWG: 2018 Kidambi Srikanth Bags Silver Medal For India in Me...