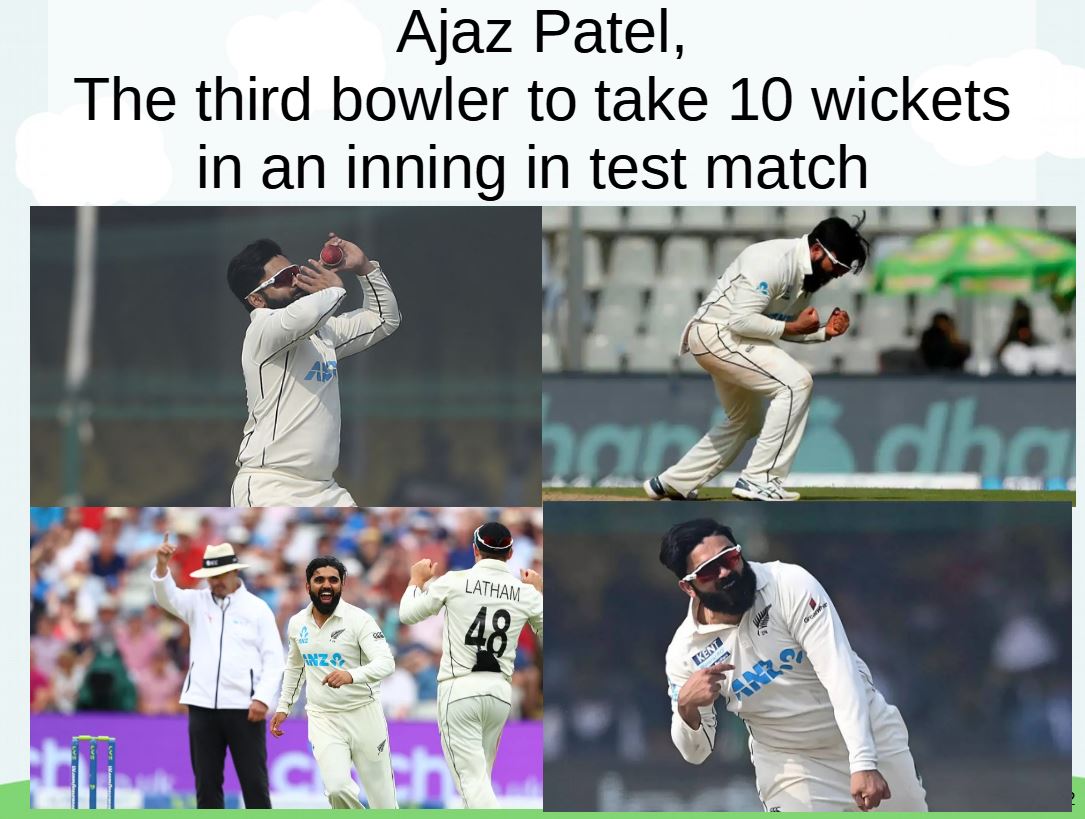 Ajaz patel completed the rarest of feats by taking 10 wickets in India's first innings: About, Details

On day 2 of the second Test at the Wankhede Stadium in Mumbai, New Zealand spinner Ajaz Patel completed the rarest of feats by taking all 10 wickets in India's first innings. On Saturday, Ajaz Patel became only the third player in Test cricket history to accomplish so. He joins England's Jim Laker and former Indian captain Anil Kumble as the only players in history to dismiss ten opponents in a single innings. Ajaz maintained his excellent bowling form from Day 1, when he took four wickets. Ajaz tormented the Indian hitters once more on the second day of the upcoming Test against India, spinning a web around them to claim the final six wickets.

In 47.5 overs, Ajaz claimed ten wickets for 119 runs. The fall of the 10th wicket, which saw Mohammed Siraj fly the ball only to be caught at mid-on, will live in the imaginations of the New Zealand players for the rest of their lives.

In the first innings, India were all out for 325 runs, with Mayank Agarwal leading the way with 150 runs. Axar Patel also contributed a valiant half-century, his first in international cricket.

In the second innings of the 4th Test match against Australia at Old Trafford Stadium in Manchester in 1956, Jim Laker had taken all ten wickets. Laker had taken 19 wickets in all throughout the match, with statistics of 9/37 in the first innings and 10/53 in the second.

Anil Kumble's ten wickets came in the famous second Test match against Pakistan in New Delhi's Feroz Shah Kotla Stadium, now known as Arun Jaitley Stadium, when he concluded with 10/74 in the second innings after taking four wickets in the first.

Patel's performance at the Wankhede Stadium on Saturday has gone down in Test cricket history as the third best bowling figures in an innings, with figures of 10/119.