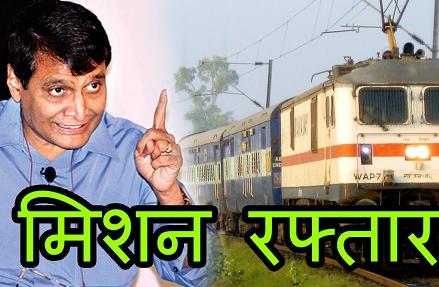 Union Ministry of Railways has organised a one-day workshop ‘Mission Raftar’ on 30 May 2018 in New Delhi, aimed at raising the average speed of freight trains and coaching trains.

The workshop on “Mission Raftaar” was inaugurated by MoS for Railways, Rajen Gohain & Shri Ashwani Lohani, Chairman, Railway Board.

The workshop witnessed the participation of Railway Minister, Piyush Goyal along with all the members of Railway Board and General Managers of Zonal Railways & Senior Railway officers.

Mission Raftar mainly aims at doubling the average speed of freight trains and increasing average speed of coaching trains by 25kmph over a period of 5 years for reducing the travel time for passengers, transit time for cargo, operational cost, improving revenues and railway’s market share.

Mission Raftar is part of the strategy to keep pace with the growing competition from the competing modes like road and airlines etc.

Under Mission Raftar, Specific Actions and Policy Decisions have been initiated on the railways for addressing different factors inhibiting average speeds. Primary routes of the railways on Golden Quadrilateral along with diagonals (Delhi – Mumbai, Delhi – Howrah, Howrah- Chennai, Chennai – Mumbai, Delhi – Chennai and Howrah – Mumbai) which carry approximately 58% of freight traffic and 52% of coaching traffic with a share of only 15% of the network taken up for initial emphasis.