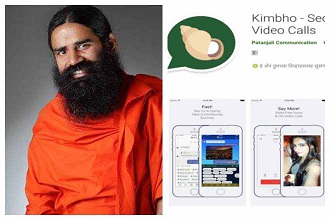 The Kimbho messaging app was first launched through Google Play Store, but soon after a day, the Kimbho App was deleted stating its trial phase. It witnessed over 150,000 downloads.

Kimbho App after a few hours of its launch received a wide attention from users but many people raised questions about the privacy and security features of the Kimbho application.

Many users also discovered a similar app on Apple’s App Store for iOS devices. It was alleged that the Kimbho iOS app is actually a copy-paste version of an existing 'Bolo Messenger App'.

The alleged Kimbho app for iOS had the same screenshots, product description and the app developer as that of the Bolo Messenger.

Patanjali Yogpeeth Spokesperson, SK Tijarawala in a press release stated that at present that Kimbho App isn’t available on any app store at the moment, and the Patanjali will not take any responsibility for the duplicates.

5G in India: A new milestone in fast-moving consumer goods (...

Babab Ramdev autobiography to be written by himself Baba Ram...