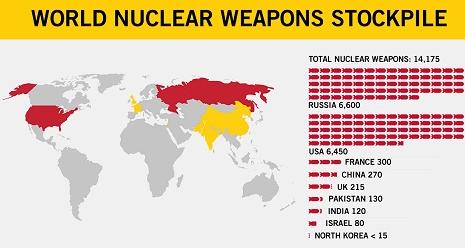 SIPRI is an independent think tank that uses open sources to compile such data since 1966.

World’s nuclear powers are reducing their nuclear arsenals but they are also modernising, putting a fresh and worrying focus on strategic deterrence.

The reduction is due to arms control commitments by US and Russia in 2010 Treaty on Measures for Further Reduction and Limitation of Strategic Offensive Arms (New START Treaty).

Above these 9 countries are either deploying or planning to deploy new nuclear weapons system. North Korea also demonstrated unexpected rapid progress in the testing of two new types of long-range ballistic missile delivery systems for delivery of its nuclear weapons.