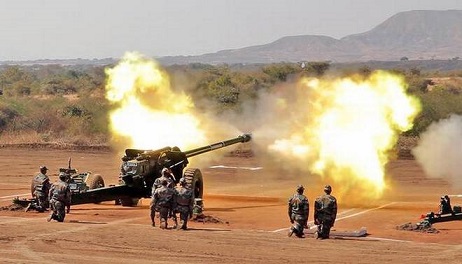 Dhanush artillery gun has now paved its way for induction into Indian Army. Earlier the gun had already passed tests under severe cold conditions in Sikkim and Leh and in hot and humid weather in Balasore, Odisha, Babina in Jhansi.

Indian Army has so far not inducted any new artillery guns since Bofors guns. India has placed an initial order for 114 Dhanush guns and is expected to order another 400 more guns.

Dhanush is a 155mm x 45mm caliber artillery gun. It has been developed by Ordnance Factory Board (OFB), Kolkata based on requirements of Indian Army and manufactured by Jabalpur-based Gun Carriage Factory (GCF).

Dhanush artillery gun is upgraded version of Swedish 155-mm Bofors howitzers, which India procured in the mid-1980s, based on its original designs. So, it is also called desi Bofors.

Dhanush artillery gun has a strike range of 40 km with accuracy and precision. Its 81% components are indigenously sourced.

Dhanush artillery gun also has night firing capability in direct fire mode. Each of this gun costs about Rs 14.50 crore while each shell costs Rs. 1 lakh.

Dhanush artillery gun has six round magazine, instead of a standard three round one.