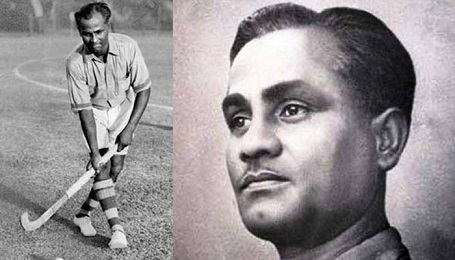 Dhyan Chand Singh was popularly known as 'The Wizard' and 'The Magician' of hockey for his excellent ball control. He plays at Centre Forward position in field hockey. He was the captain of Indian Hockey Team from 1936 to 1948.

Dhyan Chand played his final international match in 1948, having scored more than 400 goals from 1926 to 1946 (highest goal scorer in the history of hockey) during his international career.

Dhyan Chand was awarded the third highest civilian honor of Padma Bhushan by the Government of India in the year 1956.

Dhyan Chand's birthday on 29 August, is celebrated as National Sports Day in India every year.

Giant statue of Dhyan Chand on the hill top in Jhansi. The statue is visible from every roof top in the city of Jhansi