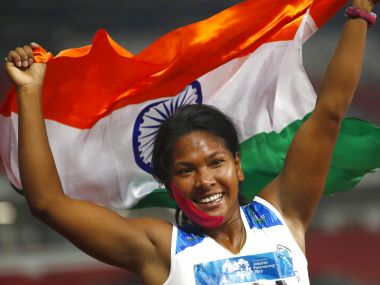 Swapna Barman accumulated a total of 6026 points to finish on top of the podium in the final of the event. Qingling Wang from China won a Silver medal with a point tally of 5954 and Yuki Yamasaki of Japan won a Bronze medal with a score of 5873 points.

With this feat, Swapna Barman became first Indian to win a gold medal in heptathlete event in Asian Games.

Swapna Barman comes from Jalpaiguri, West Bengal. Her father works as van rickshaw puller and her mother works as a laborer in the tea estate.

Swapna Barman is supported by GoSports Foundation through Rahul Dravid Athlete Mentorship Programme. She has six toes on each of her foot.

About Heptathlon: Heptathlon is a seven-event contest which covers a range of track and field events and is spread over two days. The first day comprises 100m hurdles, high jump, shot put and 200m, while day two has long jump, javelin, and 800m.