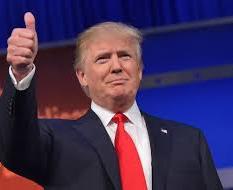 Donald John Trump born on 14th June, 1946 is elected as 45th President of United States on the republican Ticket at the age of 70.

Donald Trump, an American real estate developer, was one of the best known and most controversial businessman in 1980-1990.

Donald did his graduation from Fordham University in Economics and then joined his family business, Trump Organization.

He joined his father’s company ‘Elizabeth Trump and sons’ and constructed buildings, towers, golf courses and other branded facilities worldwide.

Trump has five children and is married to Melania Knauss which is his third wife.

Trump has been nominated twice for Emmy award and made appearances in Television industry.

Trump is the 156th richest American in the country.