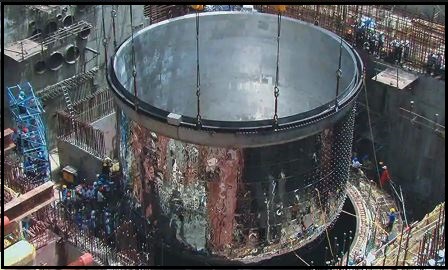 Criticality of Nuclear Reactor is the event of nuclear reactor reaching self-sustained chain reaction. This means that no external source of neutrons is required to sustain fission in a reactor core. It is a precondition of producing useful amounts of energy from the reactor.

PFBR has been designed indigenously by Indira Gandhi Centre for Atomic Research (IGCAR). It is a pool-type reactor with 1,750 tonnes of sodium as a coolant.

PFBR is designed to generate 500 MWe of electrical power, with an operational life of 40 years. It generates power by burning mixed uranium-plutonium MOX fuel, a mixture of PuO2 and UO2.

PFBR at Kalpakkam was earlier expected to be commissioned in 2012 but has missed several deadlines.

Bharatiya Nabhikiya Vidyut Nigam (Bhavini), a public sector company under DAE, has been given the responsibility to build these reactors. India is planning to build 21 such reactors by 2030.

India and Russia to develop next generation nuclear reactor ...