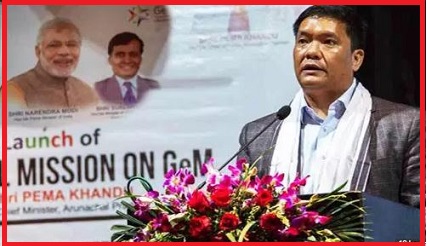 CM Pema Khandu while launching the nation-wide mission for the promotion of GeM, said that the mission is aimed at bringing in more transparency and streamlining the government procurement.

CM Pema Khandu said that the objective of the launch is to accelerate the adoption and use of GeM by the state government and its agencies.

CM Pema Khandu said Arunachal is the sixth state in India to have signed MoUs with GeM, which aims to bring in transparency, efficiency, and inclusiveness in public procurement and achieve cashless, contactless and paperless transaction.

GeM is an Online Market platform to facilitate procurement of goods and services by various Ministries and agencies of the Government. It has been envisaged as National Procurement Portal of India

GeM aims to enhance transparency, efficiency, and speed in public procurement of goods and services and eliminate corruption. It functions under the Directorate General of Supplies and Disposals (DGS&D), Ministry of Commerce and Industries.

GeM is completely paperless, cashless and system driven e-marketplace that enables procurement of common use goods and services with minimal human interface.